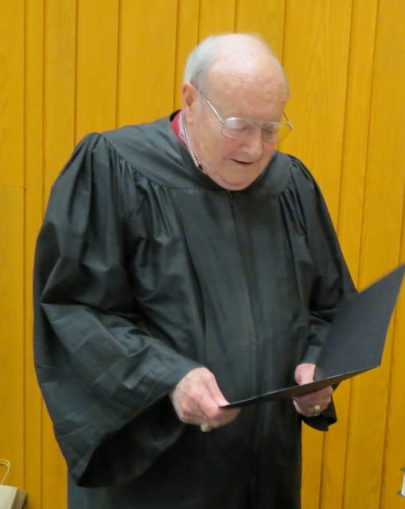 Mount Airy resident Otis M. “Bud” Oliver’s professional life was somewhat unusual due to encompassing both the judicial and legislative fields — serving as a judge and in city government — but he was recalled Tuesday as excelling at both.

“He was just a good man,” former Mount Airy Mayor David Rowe said of Oliver, agreeing that this quality is important regardless of one’s field of endeavor.

“When I think of Judge Oliver, I just think about him being a gentleman,” said Jody Mitchell, a Dobson attorney who is president of the Surry County Bar Association.

“I can’t think of a better word for Judge Oliver than gentleman,” Mitchell emphasized regarding the retired court official, who died Monday at his home. Oliver was 83.

“Judge Bud Oliver was one of the finest judicial officials that I have ever known,” said David Beal, a former clerk of Superior Court for Surry County who also has served as a police chief and city commissioner in Mount Airy.

Many remember Oliver for his dedicated service to both the criminal justice and city government realms after graduating from law school at the University of North Carolina at Chapel Hill.

“I’d like to go back even farther than that, to when I was a real young man,” Rowe said in mentioning that his grandparents lived on Grace Street next door to Oliver.

“And he was a football hero,” Rowe recalled of Oliver, who played for legendary Bears head coach Wallace Shelton before graduating from Mount Airy High School in 1956. “And I idolized him, and he was very nice to me.”

Upon earning his law degree, Oliver returned to his hometown to work as an attorney for the next 27 years.

During that time, he also served on the Mount Airy Board of Commissioners for nearly 15 years, covering two different periods, from December 1969 to December 1973 and December 1979 to November 1990, when Oliver resigned to become a District Court judge.

During his time on the council, Oliver established a reputation as being extremely analytical and thoughtful in dealing with local issues.

“I knew him when he was the attorney for the radio station,” said another former Mount Airy mayor, Deborah Cochran, who also enjoyed a long on-air career locally with WSYD. Cochran recalled that Oliver had an office on Franklin Street.

“He was one of the kindest, most gentle, most intelligent men I ever met,” observed Cochran, who said the retired judge’s death is “a tremendous loss” for the community.

“I worked with him as an SBI (State Bureau of Investigation) agent when he was practicing law,” Beal said, an association that continued into the court arena. “When he became a District Court judge, he was fair, compassionate and kind to everybody.”

Oliver served in that capacity until 1994, when he was appointed chief District Court judge of the local judicial district that includes Surry County.

Despite the lofty position he held in making decisions affecting the lives of those who came into his courtroom, Oliver never let that go to his head with an attitude of ‘I’m the judge, get out of my way,’” according to Beal.

“Judge Oliver always had a casual greeting for you when he first saw you,” the former clerk of court remembers. “I called him ‘Your Grace’ and he would refer to me with anything that came to his mind.”

Other members of the local legal community had another nickname for Judge Oliver, said Mitchell, the local Bar Association president. It was “Hundred Dollar Oliver,” the sum of the fine he often meted out for traffic and other cases he presided over.

“That was what some of us called him,” Mitchell said.

“I had the pleasure of appearing in ‘Judge Bud’s’ court for many years,” City Attorney Hugh Campbell commented Tuesday.

“As a judge he was always firm but fair. In person he was a quintessential Southern gentleman — warm, charming, quick-witted, honorable,” Campbell added. “He carried a sparkle in his eye letting you know he was engaged.”

“He had a happy side and a serious side and that’s what I’ll remember about him,” Beal said of Oliver, but it was all business when the gavel sounded to start court sessions.

Yet the judge seemed to have a way of looking beyond the mere facts of a criminal case to fully assess the circumstances surrounding someone who was charged with an offense.

“Bud was always from a judicial standpoint, I felt, very compassionate in the cases that he adjudicated,” said Rowe, who also was familiar with Oliver in another part of life.

“I knew him quite well from church,” the former mayor said of their long association at First Baptist of Mount Airy.

That’s where another local resident spent much time around Oliver, a lifelong member of that church, in addition to much earlier.

“Wonderful” was the word Mrs. Brown used to best describe Bud Oliver: “He was a wonderful judge and a wonderful Christian.”

Even after his retirement, Oliver continued to attend meetings of the Surry County Bar Association, which Mitchell said impressed him because Oliver easily could have chosen to spend his golden years another way.

“It was always a joy and privilege to talk to him and he will absolutely be missed.”

Oliver recently had health problems. “We really thought he would get better,” Mrs. Brown said.

Beal expressed his family’s condolences to that of Oliver and said, “I will miss him greatly.”

“I think he was extremely brilliant,” Cochran said in summing up the sentiments of many regarding Bud Oliver.

“He was a man of character — great character.”

“Bud rightly will be remembered for numerous contributions made in his public life, but he managed to maintain balance as a devoted husband, father and friend,” in the view of Campbell, the city attorney.

“And in that way he will be missed the most.”

Sun Jul 25 , 2021
LA-based DreamHost has been offering web hosting for 25 years and serves over 1.5 million websites. It offers quite a gamut of web hosting services, from inexpensive shared hosting to high-end dedicated servers. DreamHost review: Snapshot DreamHost’s pricing is highly competitive. Performance is good, too, and plans are straightforward to […]