Over the course of the CINEMA program, students are immersed in film production and visual effects disciplines. Classes include lessons on screenwriting and directing, 3D modeling, digital compositing and animation, and virtual reality. There are even sessions on “soft” skills, like time management.

A workforce development program of the Alonzo A. Crim Center for Urban Educational Excellence in the College of Education & Human Development, CINEMA is focused on opportunity youth — 18- to 24-year-olds not enrolled in school and not fully participating in the labor market.

The classes are taught by experienced professionals in the entertainment industry with established careers in Atlanta — artist managers, entertainment attorneys, 3D modeling experts.

The goal is to teach students the skills they need to take advantage of the vast opportunities available in the entertainment sector in Atlanta and give them the connections they need to make use of those skills. While they’re in the program, students receive a stipend that allows them to focus on their courses and their creativity.

The Crim Center was awarded a $125,000 grant by JPMorgan Chase to design and develop the program in 2018, and the firm later contributed $300,000 to help get CINEMA running with its first round of courses in 2019. In 2020, the Crim Center received another $100,000 from JPMorgan Chase and an $11,000 grant from Crafty Apes VFX, a California-based visual effects company, to continue support for CINEMA. 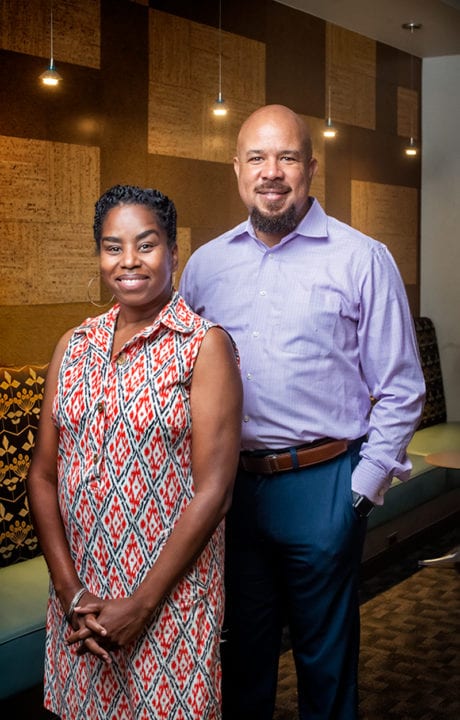 Dana E. Salter (left), the associate director of the Alonzo A. Crim Center for Urban Educational Excellence, and Brian Williams, the center’s director, created the CINEMA Program to help remove barriers to careers in the film and digital entertainment industry.

The mission of the Crim Center itself is to support children and families in urban communities by ensuring educational equality. Established in 1996, the center serves the Southeast as an interdisciplinary outreach, research and educational support hub with programs that also include the Jumpstart early literacy program, the Technology, Engineering, Environment, Math and Science AmeriCorps program, The African American Male Initiative and Girls Who Code.

So far, two cohorts of 20 students each have gone through the CINEMA Program, both in 2019. The program was on hiatus in 2020 due to the COVID-19 pandemic’s limitation on in-person and experiential opportunities, but a new cohort of 10 students is to start the program this fall.

“Each iteration of the program, since it is a film and media program, is called a season,” says Williams. “And we’re getting ready to launch Season 3.”

While the 22-week seasons are underway and even thereafter, Sankara says, CINEMA helps its students gain employment.

“It could be anything from working on-set to working in a production office,” he says. “We’ve had students work as production assistants, graphic designers and social media specialists. They’ve been working on some really cool movies and really cool TV shows.”

Sankara first came to CINEMA as a program coordinator through a graduate research assistantship while working on a master’s degree in African American studies at Georgia State. With his research focused on how African Americans transmit culture through digital media, Sankara’s adviser said he should consider applying to work with the program, which he did for about eight months before becoming its director in 2019.

“I think this program is important because it addresses directly and overtly the disparities in the creative economy.”

Wed Jul 21 , 2021
Web Hosting Hub Web Hosting Hub deals Fueled by desire to provide easy-to-setup and budget-friendly web hosting solutions, Web Hosting Hub was founded in 2010. The head office is situated in Virginia Beach (the USA) together with one of their data centers. Since then, the company has expanded to another […]